Pearl Jam makes me irrationally angry.  The moment I hear Eddie Vedder’s whiny I’ve-been-wearing-flannels-for-3-decades voice, I wanna smash my face into a cement wall…which I would realize all too late was pointless because I would still be able to hear the awful that is his music.  Just make it stop.  I’m a traitor to my generation.  Let me explain why.

Once upon a time, I went to my first and last Pearl Jam concert.  I stood there among a mass of sweaty superhero drunk people expecting to hear a set of songs because that was my understanding of what a concert was.  Vedder and friends had other ideas.  They decided to talk politics instead.  Before I knew it, the crowd was chanting “Don’t go! BP, Amoco!!”  I heard their views on the military, the Middle East, and the White House.  Somehow Dennis Rodman was relevant to this conversation (?!), so he came on stage and then I blinked and Lance Armstrong was on Eddie’s shoulders joining him in his tirade about the oil business.  Meanwhile, the closest thing I’ve heard to a song is the robotic chanting from the inebriated crowd about a couple of gas stations.  I was livid.  And THAT is the breakdown of my relationship with Pearl Jam. 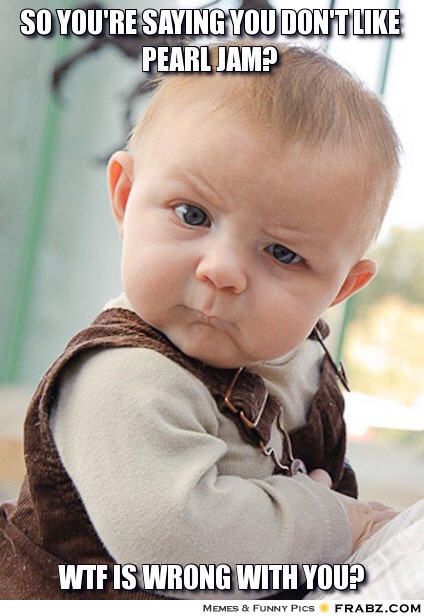 I’m sure Pearl Jam is lovely.  I bet they are great dudes who saw an opportunity to use their fame to inform and educate masses on something they feel so passionately.  And that’s great, but that’s not what I paid for or came to hear.  Sing your songs.  Or at least sing your songs first and then jump on your soap box.

One chance.  That’s all you get.  First impressions are everything.  I can’t emphasize that enough.  The entire world can tell you one thing, but until you experience it yourself, your opinion isn’t solidified.  Now this isn’t to say you can’t rectify a bad first impression.  But why make it harder on yourself?  Haven’t we already discussed that life is hard enough?

You’re gonna meet people and experience new things your whole life. It never stops.  So have a good handshake, be polite, be careful with other people’s time, PUT YOUR PHONE DOWN, and take heed of the golden rule.  It’s called respect.  The older you get, you realize how little time there actually is…unless you’re on a treadmill.  If you’re on a treadmill, time essentially stands still and mocks you slowly as you suffer.

On the opposite side of the spectrum, do what I couldn’t do for Pearl Jam and give it, her, him, them the benefit of the doubt.  Maybe it was a bad day.  We all have them.  If everything was 100% at any given moment, we would all die of sickening happiness.  There would be no appreciation.

So just remember while you’re out there in this great big world to be present and to let someone get to know you before you push your politics down their throat…or it could be your voice that sends someone into a childish fit of rage.