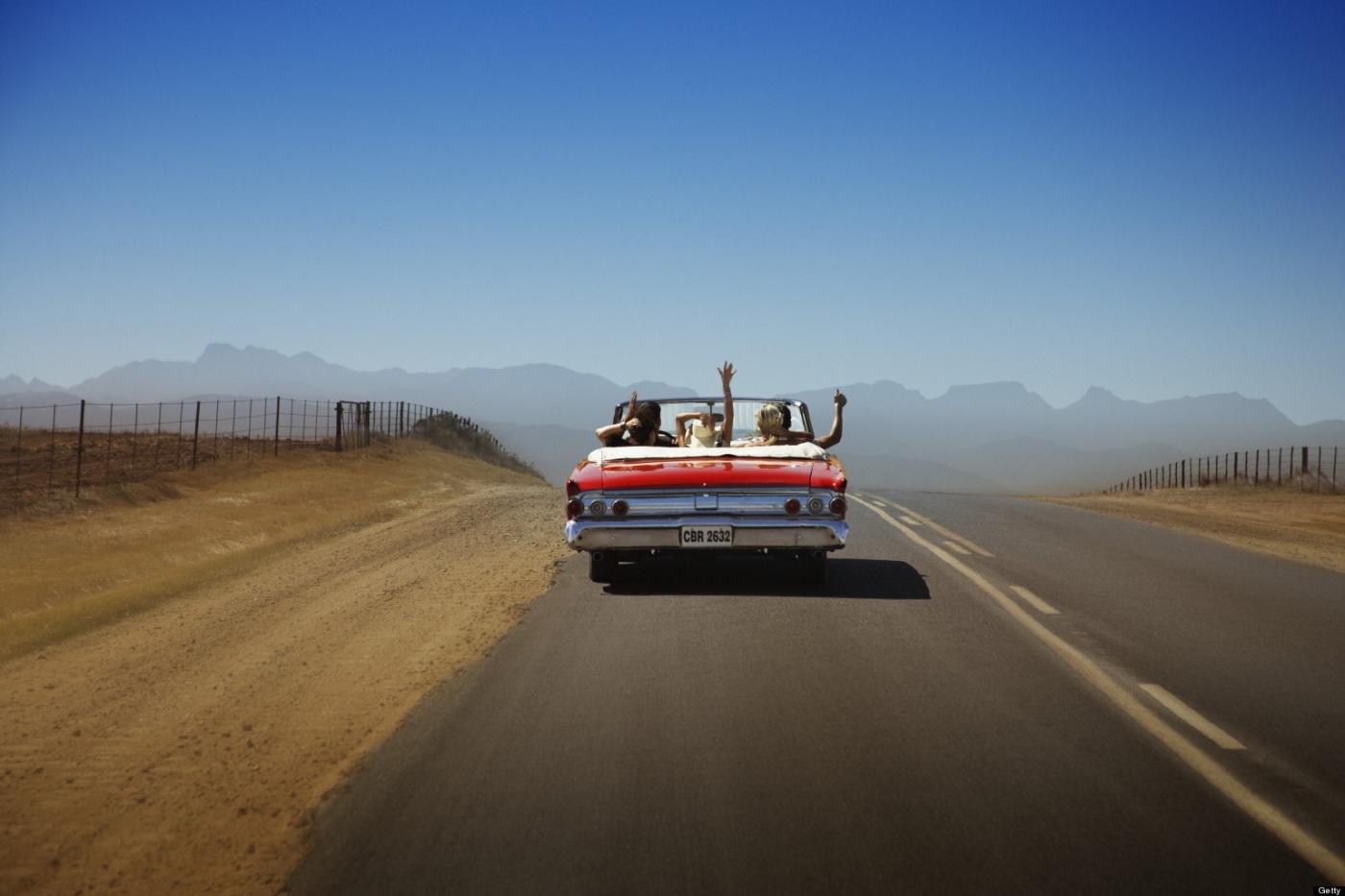 I discovered the average price of a wedding in 2016 is $30,000.  After I had a brief blackout and envisioned Kelly Kapowski unable to attend the Prom, I thought- do you know how much of Europe I could see with that money?!

If I could become a professional traveler, I would. And not in a flight attendant kind of way.  Maybe in an Anthony Bourdain way.  Traveling is magical.  It’ll change you, it’ll amaze you, and it’ll be the best money you ever spent.

And while Europe is amazing, I have a lengthy list of places I want to see in the United States.  You don’t have to go over the pond to be in awe.  Get behind the wheel and go!  There is nothing quite like a roadtrip, and as long as it’s not after a weekend in Vegas, it’s a guaranteed good time.

We went on family vacation every summer.  We piled into the minivan like the ScoobyDoo gang.  All 7 of us.  SEVEN. But roadtrips have certainly changed over the years.

Once upon a time, you actually had to buy a map and plan the route. Sitting shotgun didn’t only make you the DJ, but the navigator as well. There wasn’t a computerized voice yelling out directions and remapping you when you missed a turn. Sometimes you didn’t realize you took a wrong turn for miles. Sometimes roads changed or were under construction and you’d have to (GASP) figure it out. Sometimes you had to make a stop specifically to ask for directions. Do people even get lost anymore?

I don’t know where they all went or when it became faux pas to use , but these were a staple for family vacations all over the country at one time. When this thing came out of the garage it was go time! Perhaps it’s because the average size family is smaller and fashion has us wearing less…so there’s that.

Our lives were off the grid. And while that might sound terrifying it was actually quite liberating. We had to talk to eachother and use our imagination and play games. Dad couldn’t be reached for work, the problems at home stayed there, and I didn’t talk to my best friend for a week. Now that there’s an app for everything under the sun that you can download onto your tablet, phone, iPad etc-it’s pretty hard to be unamused anymore.

That TV/VHS combo used to sit on top of a cooler in between the two front seats of our red mini van. It was always a heated debate on which movie to watch first. Someone got knocked in the head, someone else was crying, and someone else was filled with fake promises. The volume came out the back of the set and had to be turned up really loud so everyone could hear. Meanwhile, my parents could hardly hear each other and we’re not even out of the neighborhood yet. I don’t know what this individual screen business is but it sounds like cheating.

We didn’t use adapters to keep things chilled…we used ICE. Sometimes when you grabbed things from it (that is after you moved the TV off of the top of it) they were wet from the melted ice and somehow we survived. I remember that ice being used for pranks, weapons, and sibling terror. It was a part of the adventure. I had no idea that ice was such a monster!

Listening to your favorite song wasn’t always such a simple concept. You had to listen to the radio…and wait. You’d wait for however long it took and then you’d push down play and record at the same time on your stereo and it was finally yours. Play. Rewind. Play. Rewind. The beginnings of a mix tape. Now consoles have CD players and built in satellites with radio stations dedicated to particular singers. And now that you can plug your phone in, CDs seem to be on their way to the days of yore. Onward and Upward.

When you needed gas, you stopped. If you were hungry, whatever happened to be around you on that pit stop became an “option.” There was no multiple stopping or waiting for a specific place. That fork and knife symbol was all you got. Now it’s crazy specific and you can even use your phones to find out what’s ahead or search for a particular establishment. Exits aren’t gambles anymore, they’re guarantees. What’s the fun in that?

I can only imagine what a roadtrip will look like 10 years from now, but I can promise you it’ll never go out of style.  So what are you waiting for? Why are you even still reading this?