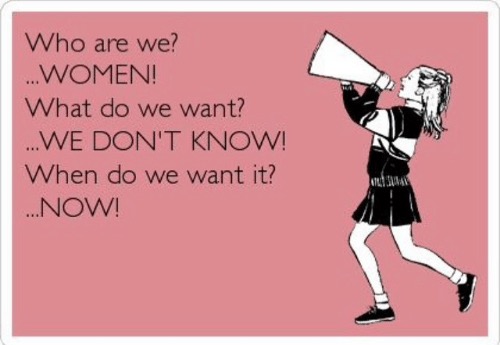 What do you want?  What are you looking for?   These are both valid questions that I have a very hard time responding to with direct answers…or answers that make a tiny speck of sense.  Now maybe this is because I’m a Cancer and my mind runs at Olympic speed at all hours of the day so instead of a big bright answer rising to the surface, I only have more questions because why wouldn’t I make things more complicated?  Maybe it’s my attempt to subconsciously keep my expectations low so that when I’m disappointed it’s more of a light pinch as opposed to a fullout punch in the guts.  Maybe it’s because I’m just trying to keep it real because sometimes I wanna be the life of the party and other times I wanna wrap myself in a blanket, much like a cocoon, pretend I’m in a Narnia wardrobe where calories don’t exist and binge watch Buffy the Vampire Slayer.

Asking a girl what she wants is like asking a toddler what they’ve been up to while you weren’t looking.  They’ll say nothing but you’ll learn they’ve left a path of mass destruction in their wake involving permanent markers, lipstick and carbs. It’s like a crime scene of passion that no one can quite understand.  I like to think of it as trailblazing.

This is what happens inside of my brain when someone asks me what I want:  I want to be happy.  I want to be successful.  They perpetuate eachother.  I want love.  The kind of love people write books about, that makes you believe magic exists and the world is worth saving.  I also want to figure out how to lose 45 pounds in a week by eating pizza.  I don’t need a white picket fence but I would like a moat around my house with a drawbridge.  I want to never have to shave my legs again and I want the gross mole on my upper thigh to fall off because every time I see it I feel like a witch.  Not a wicked witch of the west but the kind of witch with voodoo dolls that eats children inside of a house made of gumdrops.  I would have loved to have been a female teenaged mutant ninja turtle.  Oh my god, did I leave the straightener on?   …I mean, it’s a total meltdown of epic proportions.

I’ve been told if you can’t articulate what you want then you must not know what it is you actually want.  To that I say this:  STFU.  Maybe I like to be inspired!! Leave me alone with your vision boards and manifestation theories.  You don’t know me!  Sometimes I’m hungry and I don’t know for what.  I’ll walk into a grocery store without a list (gasp!) and figure it out.  Just because I’m an adult, which I’m learning is essentially a word that means old, does not mean I need to have a blueprint of my future.  Just because so and so did it this way does not mean that I’m doing it the wrong way.  This life is going to be done my way and no one else’s.

So what I want is for people to understand that I don’t fit into any particular box and I’m going to do this my way because I’m stubborn like a thundercloud in June.  I’m all about manifesting my destiny but I also believe in surprises and maybe I want to leave room for that in my life.  I don’t need every detail mapped out.  I’ll take a rough draft outline.  So whatever you’re doing, however you’re doing it, keep on keeping on.  Live up to your own standards and blow kisses to anyone who thinks they know better.  Hell, somedays I don’t know what I’m doing…but I sure am happy doing it cause, like Rick James, I do what I want. Do you boo.